Lilwall, of Llydyadyway, Cusop, a member of the (Herefordshire) Woolhope Club since 1877, was one of the principal landowners in the parish and an amateur archaeologist. The Club’s reports include superb photographs by Alfred Watkins (see Oxford Dictionary of National Biography). From these we can establish just how far the choir and chapter-house at Craswall conformed to the standard Grandmontine plan. As Carole Hutchison points out, the order observed ‘a remarkable uniformity as regards both plan and style. Without exception they comprise a single-aisled, tunnel-vaulted nave, lacking transepts and terminating in a semi-circular apse, which is marginally broader than the nave.’ This was achieved by ‘that curious reveal between the eastern sector of the nave and the sanctuary’ (see Figs 1-3). 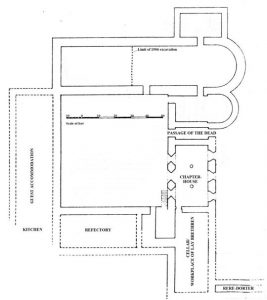 On 28 June 1904 sixty members of the Woolhope Club visited Craswall priory. Disembarking at Hay-on-Wye railway station, they were forewarned by Lilwall of ‘a walk of seven miles including an ascent to 1,450 feet, over roads undulating, tortuous and in some places rough’; but when they arrived they discovered ‘very little had been done’ to reveal the architectural detail of the choir. 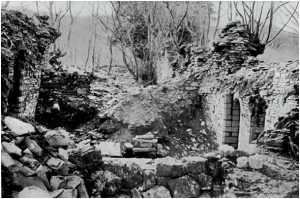 Fortunately for us today Alfred Watkins and Robert Clarke made a second visit, in May 1905. Now they could see the entrance to the north chapel, as yet unexplored, and the aumbry (3 on plan) on the north side, and the ambulatory around the apsidal east end. Behind the broad twin steps leading into the sanctuary (see Fig 8) stood the altar, measuring 8ft 6ins long by 2ft 8ins wide and 2ft 6ins high, but lacking its upper surface, the mensa. 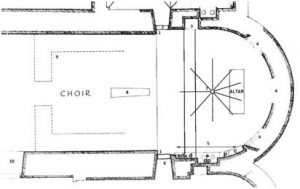 Plan 2. Wright’s plan of the 1962 excavations at Craswall Priory church 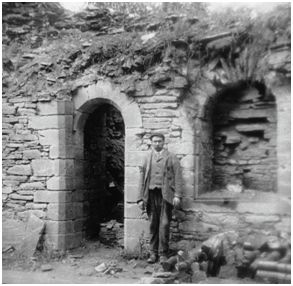 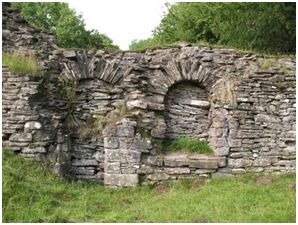 The ‘east end was pierced by three narrow deeply-splayed Norman windows’, the Grandmontine triplet, of which only the western jambs of both north and south windows could, and can still, be seen. 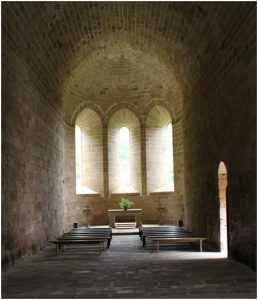 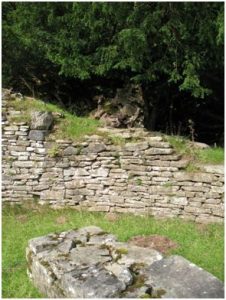 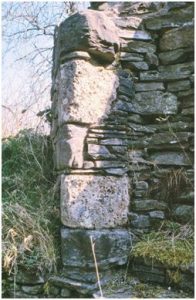 In 1962 Cecil Wright was to find the stepped cill and fragments of the south jamb of the west window, such as at Comberoumal, Aveyron (Fig 7). 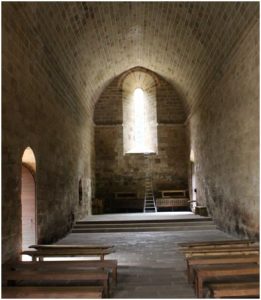 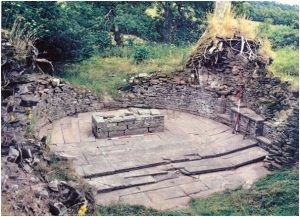 Fig 8. The chancel after the Society’s 1985 clearance, prior to the paving
being covered with turf for its protection

In front of the altar were three Early-English style trefoil heads decorated with dog-tooth ornament (Fig 9). One can see that these had formed a decorative cover for the credence, double credence, double piscina and triple sedilia for priest and deacons on the south wall of the chancel (Fig 10; marked 5 on Plan 2). This important architectural feature represents a major modification of the standard Grandmontine chancel layout. 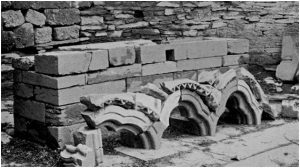 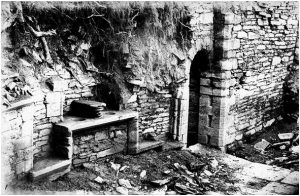 It was last recorded on site in December 1913 by the architect Basil Stallybrass, who was commissioned by the Society for the Protection of Ancient Buildings (SPAB) to report on the current state of the ruins. One of his recommendations was that the trefoil heads should be pieced together and re-erected. When Alfred Clapham visited 12 years later the arcading could not be seen. It is fortunate indeed that it was photographed by Watkins, for it represents a highly significant episode in the history of the priory.

Another major architectural feature, photographed on the ground by Watkins, was a nine-ribbed boss (Figs 11 & 12). This also had disappeared by the time Alfred Clapham visited Craswall. Hence his 1926 plan shows a six-, not nine-ribbed vault over the sacristy. 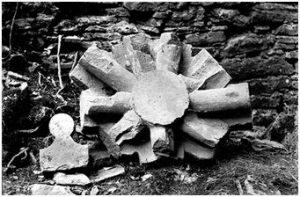 News of the Craswall excavations had evidently attracted national attention, for the 50 visitors included the President of the Archaeological Institute and visitors from Jarrow and South Shields. En route the party stopped at Lilwall’s home, Llydyadyway, where they inspected a number of finds such as coloured plaster, leading and nails, and fragments of stained glass.

For Professor Richard Marks the ‘fine head looks early 13th century’. All these objects can be seen in Hereford City Museum. Lilwall explained that, ‘a large doorway leading from the church to the cloisters has been opened up (10 on Plan 2), a quantity of ancient glass has been found, and on cutting into the cloisters, a number of encaustic tiles have been dug up, showing clearly that the cloisters themselves were paved with these’. Evidently not amongst the objects granted to the Museum in 1918, these last cannot now be located.

In his book, Something about Craswall Priory near Hay (1910), Lilwall tells us ‘perhaps the most interesting discovery up to the present has been that of a large stone coffin lying under the pavement of the church, and at a depth of five feet, in the middle of the Church itself, in front of the lower step leading up to the high altar (see Plan 2). Huge flagstones lay on the coffin, and it required a large amount of labour to remove them. When this was done a perfect skeleton was exposed, which measured six feet two inches in length. When the coffin was first open the skeleton was entire, but in the course of an hour it had crumbled away … Fragments of the oak coffin in which the remains were at first interred were also found.’ Stallybrass places the coffin north-south on his 1913 plan, but Clapham shows it east-west on both his 1926 plan, when it was still visible but ‘lacking its cover’, and again in 1931, as did Wright in 1962, when he showed the narrow foot end facing east (8 on Plan 2).

Clapham suggested the coffin was ‘probably of one of the founder’s family’, possibly that of Walter II de Lacy’s only son and heir, Gilbert. He was well aware of the three Craswall foundation charters at Christ’s College, Cambridge (see Foundation and Documentary Evidence), and of documentary evidence from Alberbury. In 1226 its founder, Fulk fitz Warin III, whose wife Matilda had died, gave 24 acres for her soul, and for her body to be buried in the priory church. Clapham points out that the bodies of Fulk and his two wives were found buried before the presbytery steps just to the east of the monks stall, ‘a position exactly analogous to the important burial at Craswall’. At Egton in 1294 the patron, Peter de Morley III, confirmed his grant of the local mill to the corrector and prior for there to be two more chaplains, ‘to say daily masses for the souls of he and his wife [Nicolaa] and their ancestors’.

However the Tewkesbury annals record that ‘Gilbert de Lacy, son and heir of Walter de Lacy, is buried at Llanthony’, one of the most handsome priories in Wales, for which Walter and his father had provided the resources. If the skeleton at Craswall was not that of Gilbert, it must have been of Walter himself, for the Grandmontine Custumal prohibited burial within the precinct of all but monks and benefactors.

Another interesting find described by Lilwall on this occasion was ‘a leaden casket containing a relic of Saints’ bones’. (Fig 16) In 1966 casket and bones, what Lilwall called the ‘left arm bone of a small man’, were sent to London University’s Institute of Archaeology. I.W.Cornwall reported that the bones represented ‘a left forearm and most of a hand’, cut at the elbow, perhaps with an axe or meat cleaver by at least two blows. He estimated the individual’s height as over 5ft 6ins: if a female, ‘she was tall and large handed, well above the average’. There is no clue as to the saint’s identity, but in 1942 George Marshall suggested that ‘you have here a bone of one of St Ursula’s 11,000 Virgins of Cologne’, martyred c400, provided by the abbot of Grandmont at the request of Walter II de Lacy. ‘Have faith, gentlemen’, Marshall wrote, ‘it can move mountains.’ 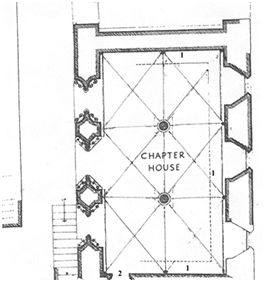 Lilwall finished his excavations in the church by the entrance from the north cloister (10 on Plan 2). He then turned to the chapter-house, the principal building of the east cloister. Here, after the first service, the monks met each day under the chairmanship of the Corrector, to hear the reading of a chapter of their Rule, confess and correct faults, and discuss the business of the day. Again, Watkins’ photographs give us a vivid impression of how this structure looked in its heyday.  (Figs 20-24)
Plan 3. The chapter-house from Wright’s block plan:
1: ‘remains of what were seats’; 2: doorway leading to ‘warming house’ (Clapham)

Grandmontine chapter-houses were of two types, single or double bay. Of some 20 chapter-houses still existing in France, most are the former, as at Comberoumal, with its Romanesque round vault, and Chassay-Grammont (Vendée), with its Gothic vault (Figs 17-19). Craswall is of two bays, with the same vaulting pattern as Puy Chevrier (Indre), Badeix (Dordogne)  and Francour (Tarn et Garonne).

As Carole Hutchison has observed, ‘chapter-houses constitute the only area of a Grandmontine monastery where the strict architectural rule of uniformity appears to have been considerably relaxed’.  Certainly, as she says, at Craswall the chapter-house was ‘unusually large and … exceptionally ornate’. 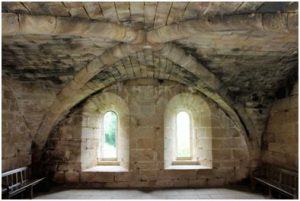 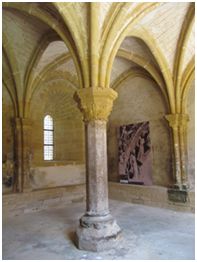 As Lilwall explained, the entrance doorway and windows on either side are ‘very beautiful examples of Early-English work’, the same era as the credence-piscina-sedilia ensemble in the choir, suggesting that the chapter-house was rebuilt at that time. Watkins’ photographs show the exterior of the entrance from the cloister, with five detached shafts on either side (Fig 20).  The windows to north and south were likewise shafted. He also provides an internal view of the window to the north (Fig 21). 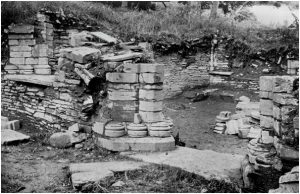 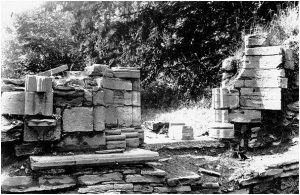 At Craswall, 37ft by 21ft, the bases of the two circular columns carrying the vaulting which divided the room into six equal bays can still be seen. Against the walls are the bases of six triple corbel shafts, with single shafts in the corners. (Figs 22, 24-6 and Plan 3) 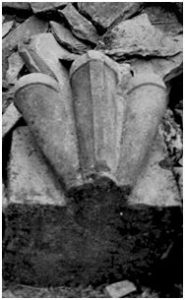 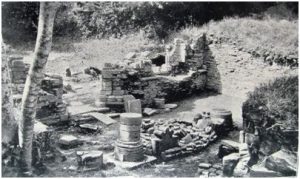 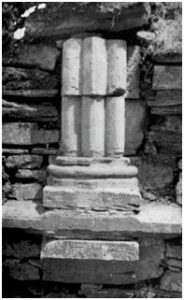 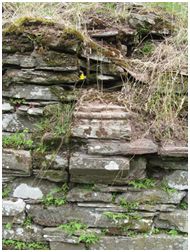 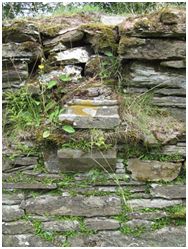 The eastern wall had three windows, the bays of which are still visible, as shown below. Some remains of ‘what were seats’ could still be traced. By the south-west corner the remains of a doorway led to what Clapham describes as the warming house, site of the cellar in French houses. 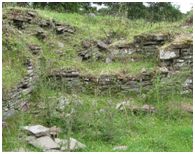 Fig 27. Remains of the east windows of the chapter-house today.