Craswall Grandmontine Society was founded by Carole Hutchison and Kate Douglas in October 1983. Its objectives are ‘the education and instruction of the public by the furtherance of the study, investigation, description and preservation of the historical and archaeological evidence of the Grandmontine Order in Britain and in particular the Priory at Craswall’.

Conservation work, a combination of selective excavation, consolidation and backfilling, was carried out at the Priory in partnership with English Heritage (now Historic England) between 1987 and 1996, following which the priory was rescheduled in 1996. Particular attention was paid to the consolidation and display of ‘those parts with a special significance for the understanding of Grandmontine architecture’, with appropriate treatment elsewhere ‘to preserve the medieval fabric and associated archaeological deposits’. In 1990 the Society commissioned an architectural survey to ‘identify and quantify the structural problems of the priory’.

The first stage of the work, the urgent repairs to the historic fabric, was carried out during March to May 1993. Consolidation took place of the internal face of the south wall of the church, the west wall of the chapter house and the dorter stairs, north side. (Figs 38-9, courtesy of Bob Tolley) Scheduled Monument Consent was granted in August 1994 for Phase II: consolidation and stabilisation of rubble masonry in the north wall of the nave, the apse, and the north-east corner and east wall of the chapter house, work to protect the chancel floor, and selected removal of previously backfilled areas adjacent to the above. Phase II was completed in November 1995. The last major work on the site, in 1997, was surgery on the yew tree at the north-west end of the church which cost, in all, £3,600. Total expenditure on the conservation of the priory 1990-99 was £75,000. 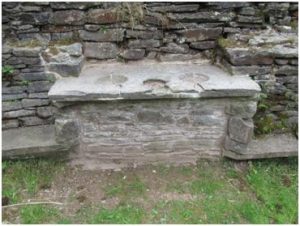 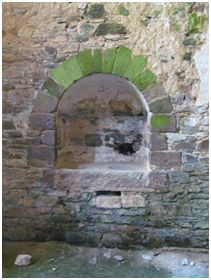 In 2014 English Heritage (now Historic England) carried out conservation works to the piscina ‘to prevent further settlement, cracking and loss of fabric’. Saplings growing on the ruins south and west of the cloister were also cut down. Long standing problems relating to the ancient yew at the north-west end of the nave, which pepper the Society’s files, would ‘require expensive consolidation and further assessment, possibly to be addressed with underbuilding and more severe intervention than just propping, which has held up until this point thankfully’. This, and other outstanding issues including replacing the soft capping on the walls with modern soft capping, proven to protect ruins in a more sustainable way, is currently being addressed (2016). 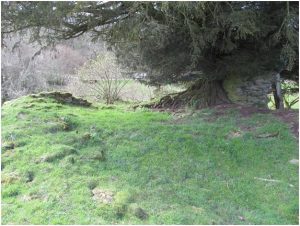