Carole studied medieval history at London and archaeology in Rome where she lived for ten years, studying the Etruscans and working at Pompeii and Perugia. On her return to the UK she became a librarian and worked for a time with the RNIB, later becoming librarian and part time teacher at a school in Forest Gate.

Carole became interested in studying the Cistercians and was beginning research for a doctorate on medieval drainage systems when on a visit to France she and Kate visited Grandmont, near Limoges. A book that Carole bought from its author, André Lanthonie, about the Order of Grandmont mentioned the three English houses ‒ and the imposing remains of Craswall at Llanthony! Thus began the Grandmontine adventure.

Carole and Kate founded Craswall Grandmontine Society in April 1984 to educate and instruct the public by the furtherance of the study, investigation, description, and preservation of the historical and archaeological evidence of the Grandmontine Order in Britain. Thirty-five members of the public attended the inaugural meeting at Hereford Town Hall. The first stage in the process of urgent repairs to the historic fabric began in March 1988. Total expenditure on the conservation of Craswall priory 1990-99 was £75,000. In 1996 English Heritage produced a revised and detailed rescheduling of the priory. Conservation work continued.

Carole and Kate formed a close friendship with Cecil Wright, who had excavated the priory in 1962. It was Carole who, following discussions with Wright during his stays at Rauzet, realised that the so-called ‘south chapel’ at Craswall ‘was not a chapel at all but quite possibly the first little oratory erected by the pioneer community’.

Carole not only led the Society to ensure that ruins at Craswall were carefully preserved. Her excellent book, The Hermit Monks of Grandmont, Cistercian Studies Series 118 (1989), quickly established itself as the classic work on the Order, including its English houses. Amongst her other writings Carole contributed an article to Current Archaeology 126 in 1991, pp274-9, ‘Two Grandmontine Priories: Pinel and Craswall’. In June 1989 she and Kate mounted an exhibition at Hereford Cathedral on ‘the History and Architecture of the Order of Grandmont with photographs, plans and models of Craswall Priory’.

In 1991 Carole and Kate joined a group of enthusiasts to buy the remains of the priory of Rauzet in the Charente. Carole organised archaeological summer schools in collaboration with Western Michigan University. Over ten campaigns the students and volunteers revealed the complete ground plan of the monastery. She advised and assisted with the restoration of the church and lived there permanently from 2002. The church is now almost fully restored with the permanent stone flooring due to be completed early in 2023. Carole never did complete her doctorate, but she achieved a dream. 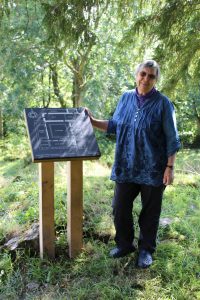 Kate Douglas, co-founder of the Society, with the new plan of the site, dedicated to the memory of Carole Hutchison

Christopher Armstrong was born in Cambridge in 1935. He attended Downside School, becoming a member of the Benedictine monastic community at the end of his school years. He studied at Universities in Spain, Switzerland, France and Cambridge. It was in Cambridge that he met Meriel Moir, and they married in 1967. At the time of their marriage they purchased Rowlestone Mill, giving them a base in Herefordshire whilst Christopher worked as an Anglican priest in various parts of England and Wales. When at Rowlestone they would make visits to Craswall Priory, which when they first knew it was a very overgrown site. Therefore they were keen to be involved when the Craswall Grandmontine Society was formed. Christopher was an important member of the Committee from the beginning, when Dick Vowles was Chairman, Ron Shoesmith Secretary and Robin Newman Treasurer. Christopher was instrumental in setting up and planning the route of the annual Craswall Pilgrimage, from the Cistercian Dore Abbey to Craswall Priory, and in arranging the many interesting speakers at Evensong, notable amongst whom was Rowan Williams who led the pilgrimage in 2014. Christopher continued an active member of the committee until his move to Yorkshire and remained interested in the work of the Society up until his death in July 2021. His ‘help and encouragement’ were acknowledged by Carole Hutchison in The Hermit Monks of Grandmont.